The evening’s events were hosted by The Telepathy Project (Veronica Kent and Sean Peoples), and featured their collaboration with Sophia Brous who presented the premiere of (Space) Dream Triptych, an avant-garde space opera set in three parts, exploring the shifting dream states of the unconscious, longing and isolation, in infinite space. 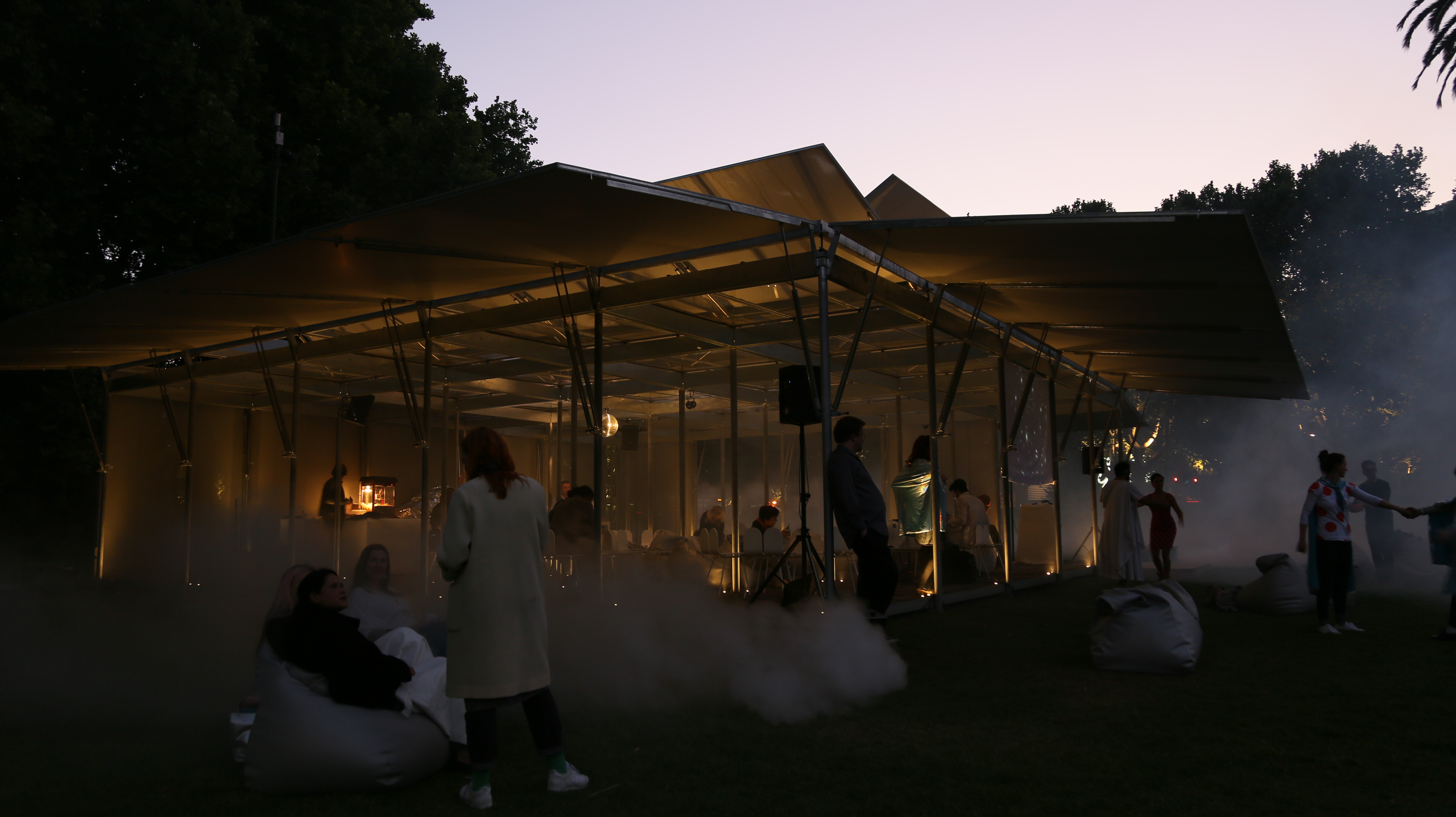 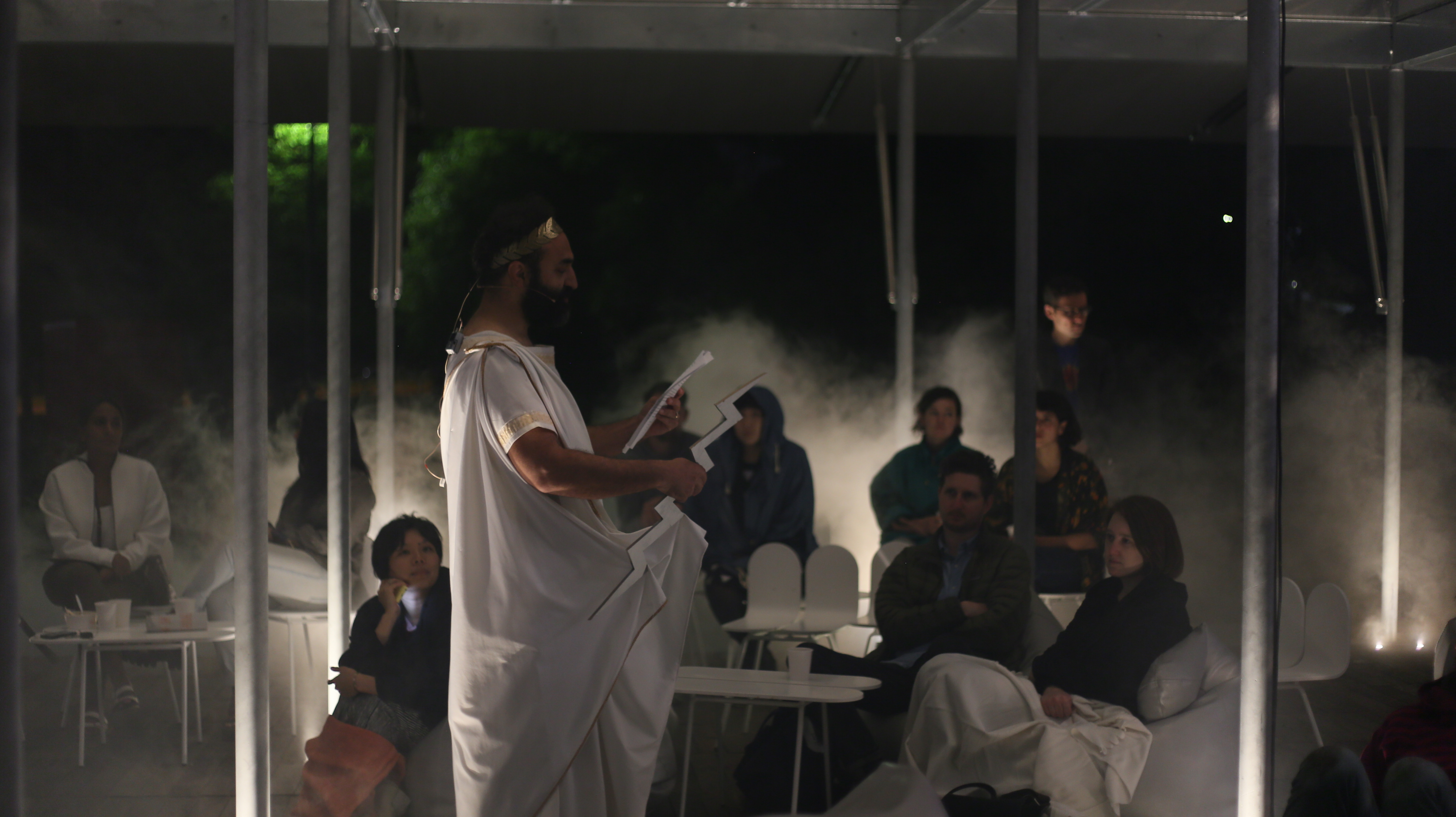 Zeus on the creation of the universe 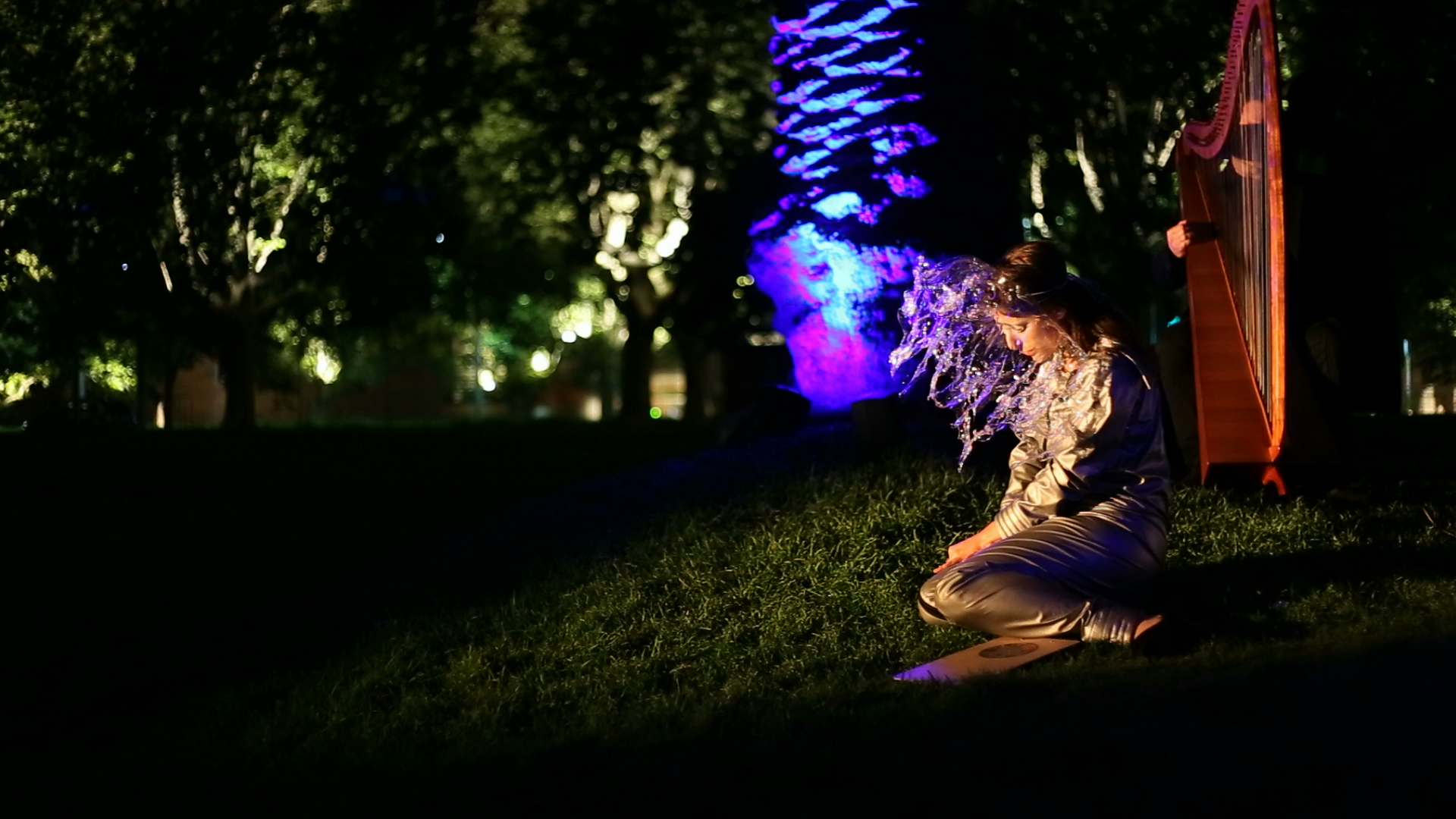 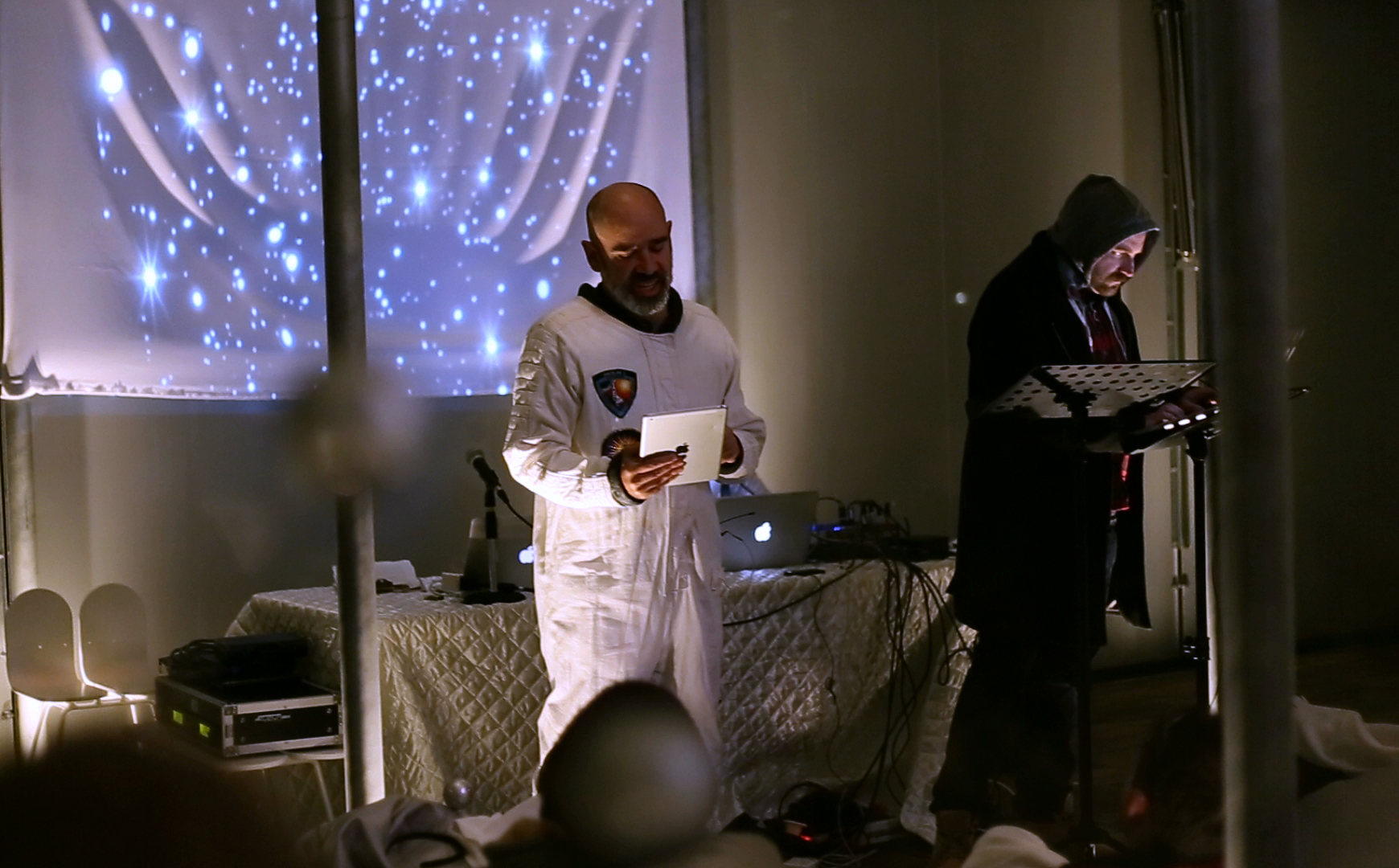 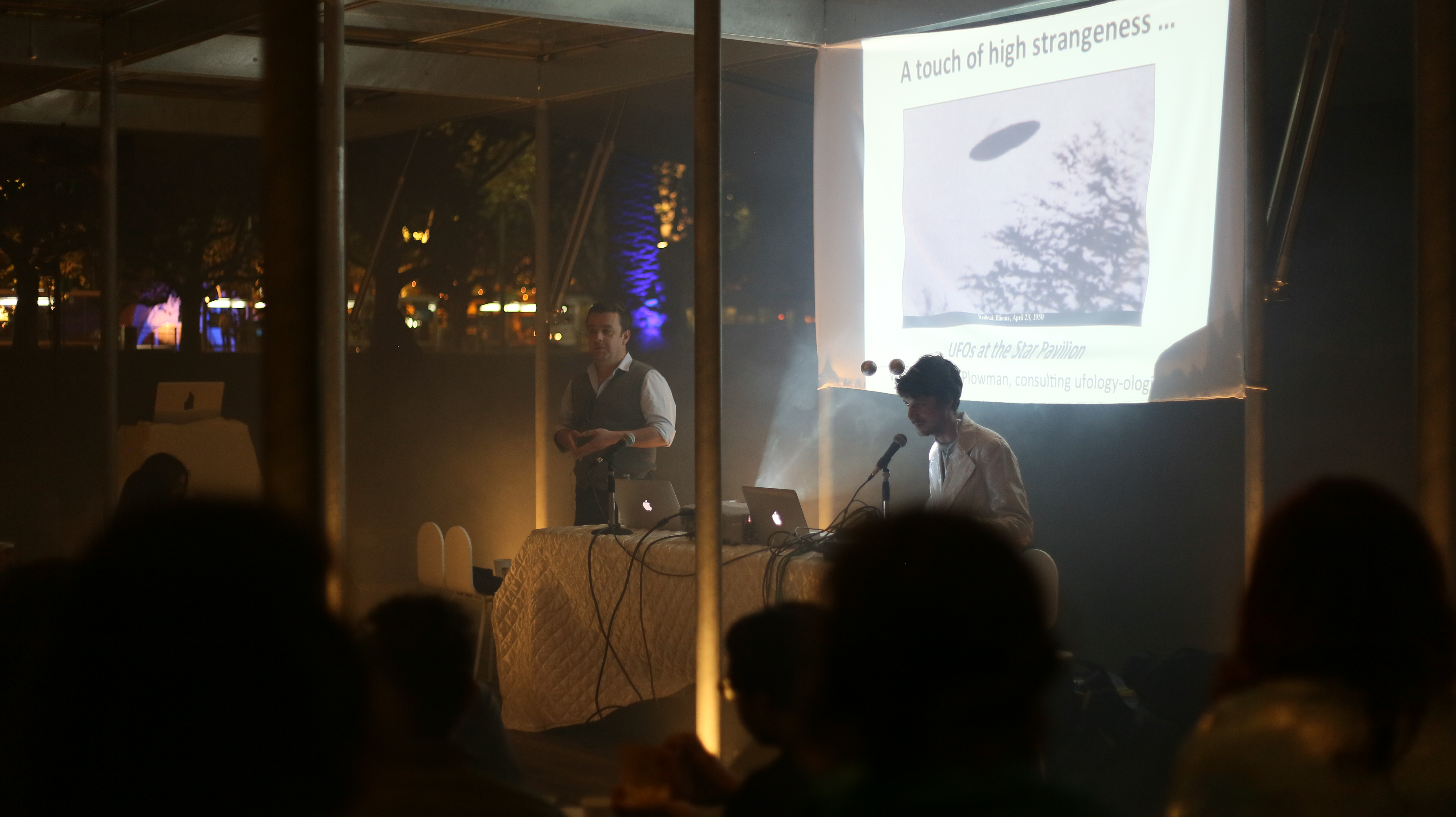 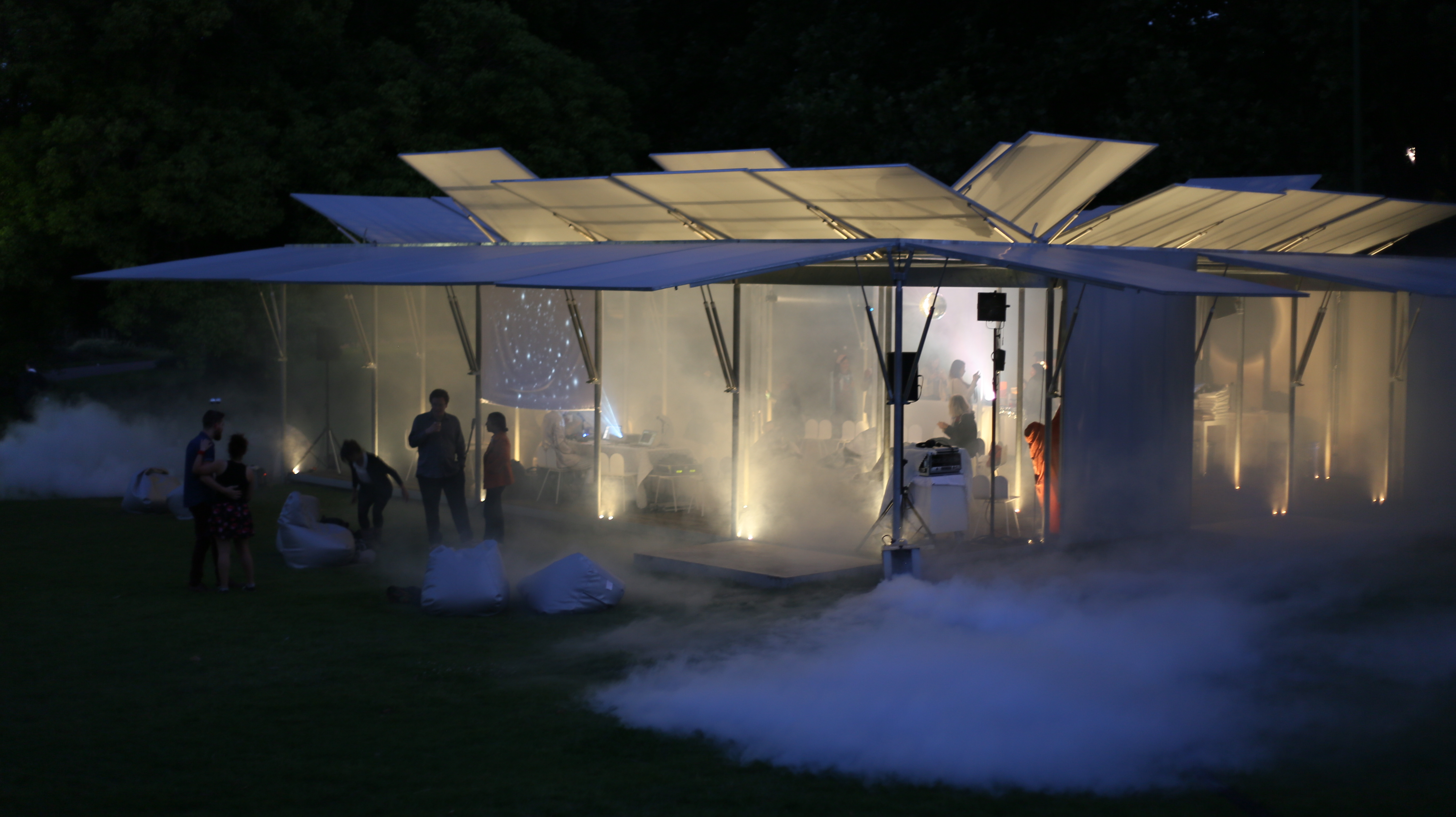 nightime in the Star Pav 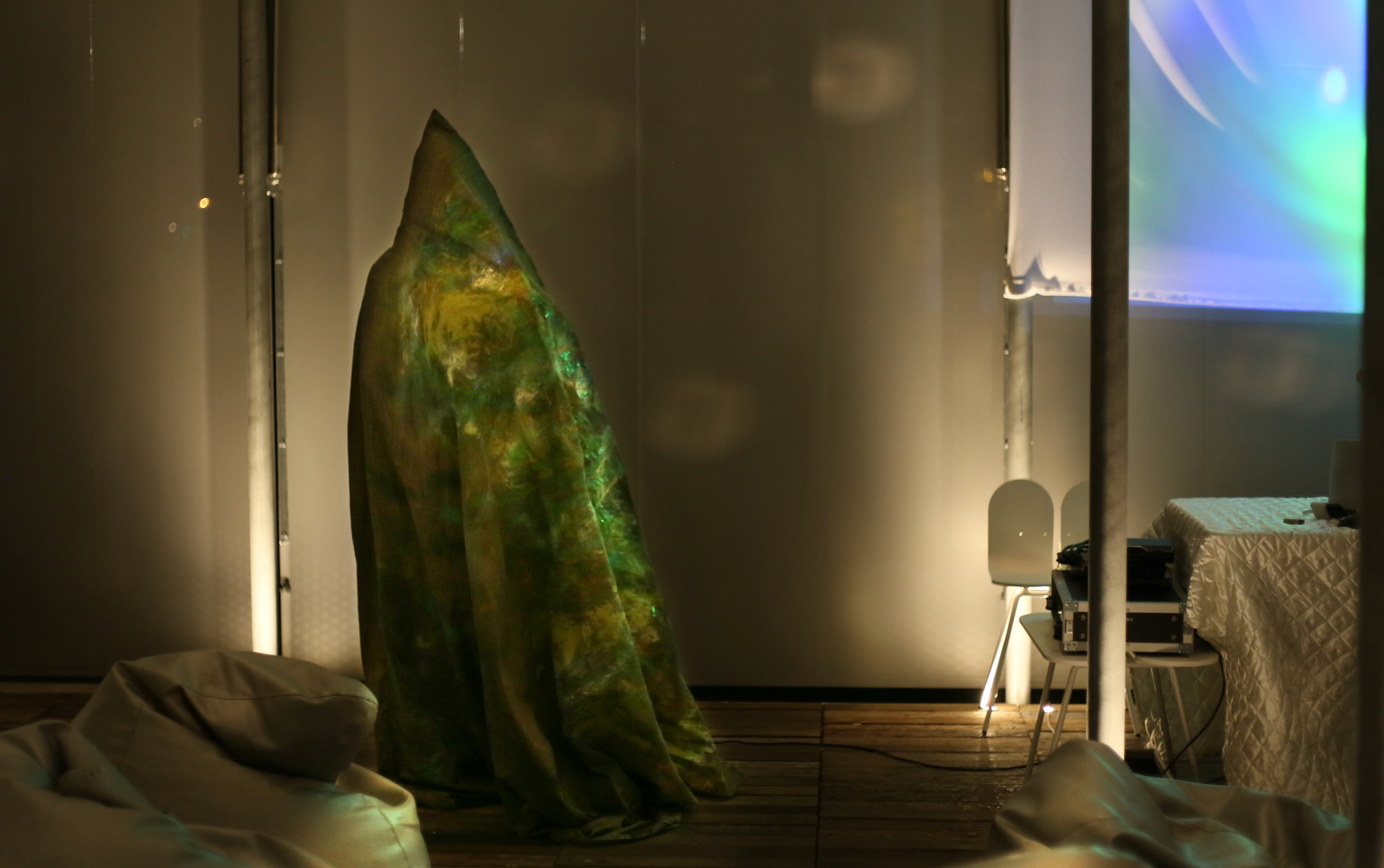 Blob Reading Mike Kelley’s “On the Aesthetics of Ufology”. 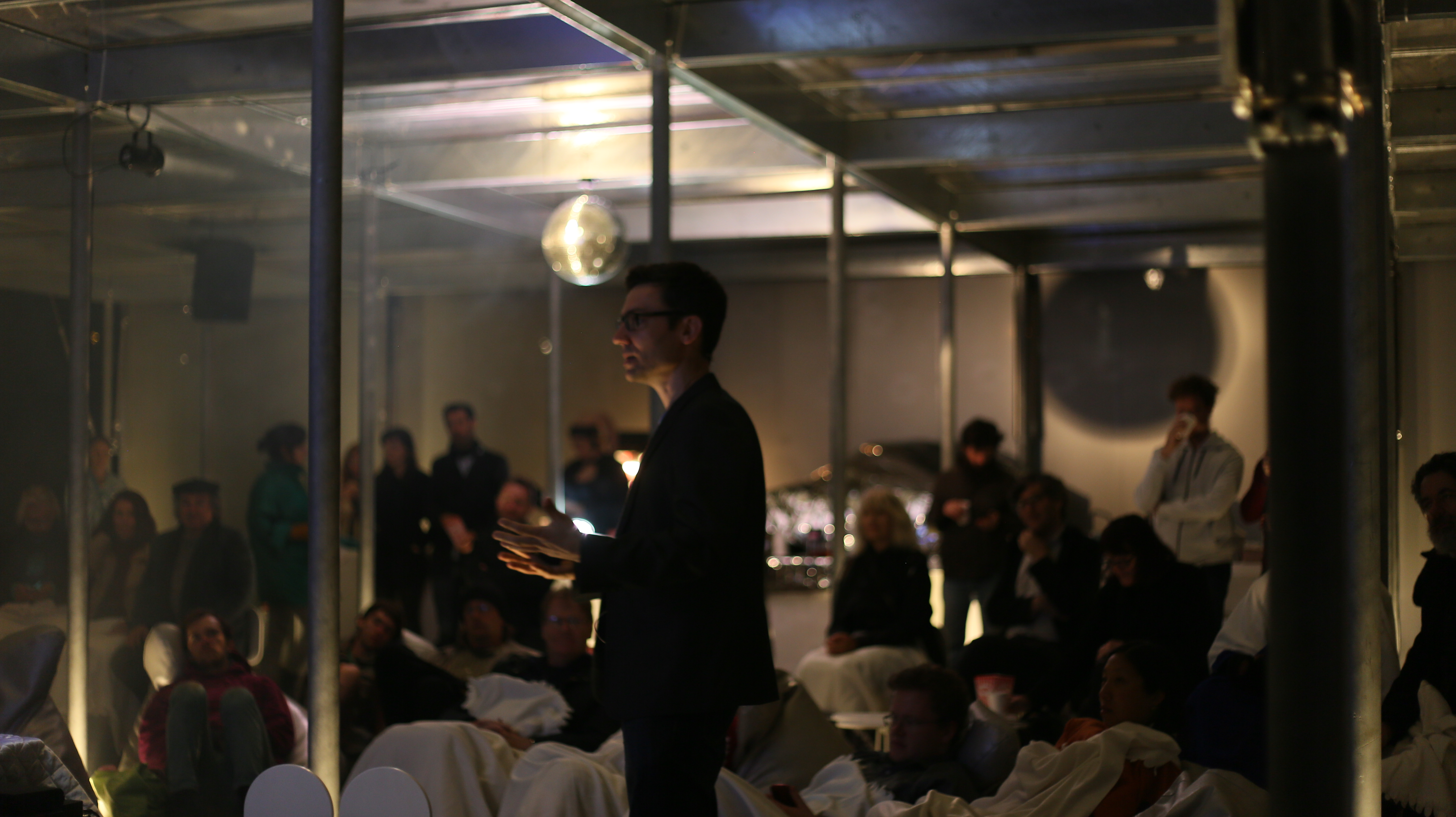 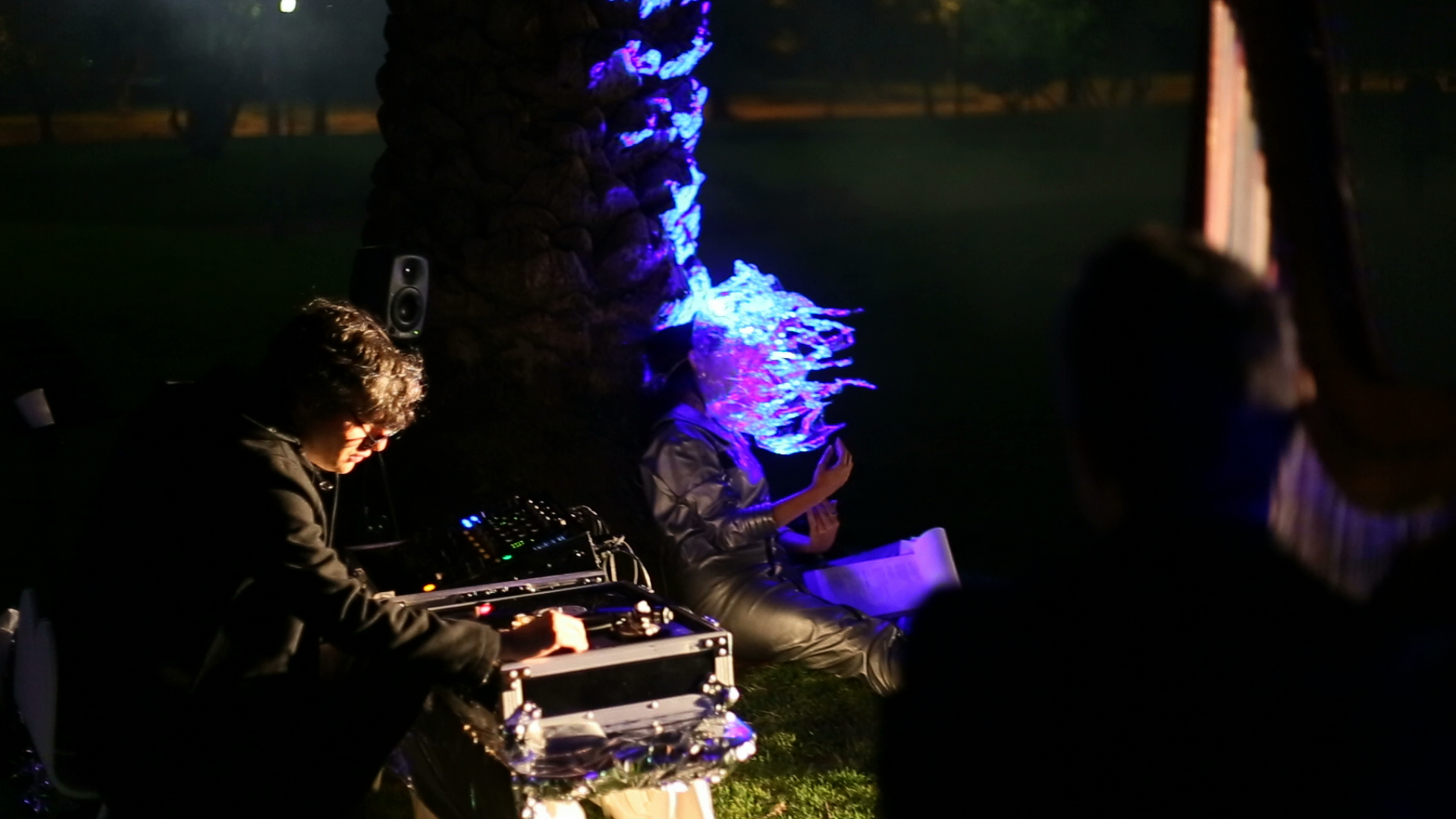 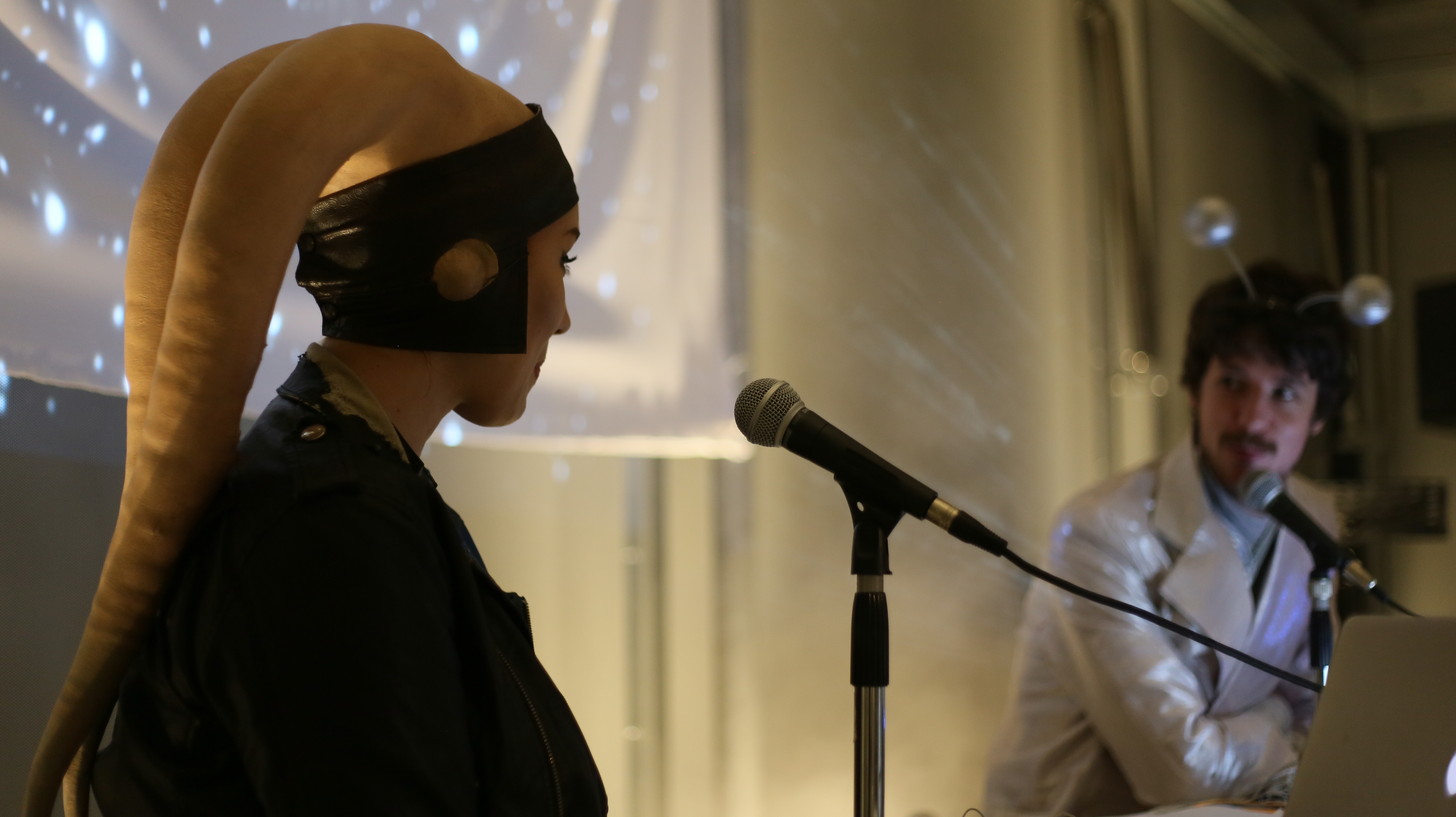 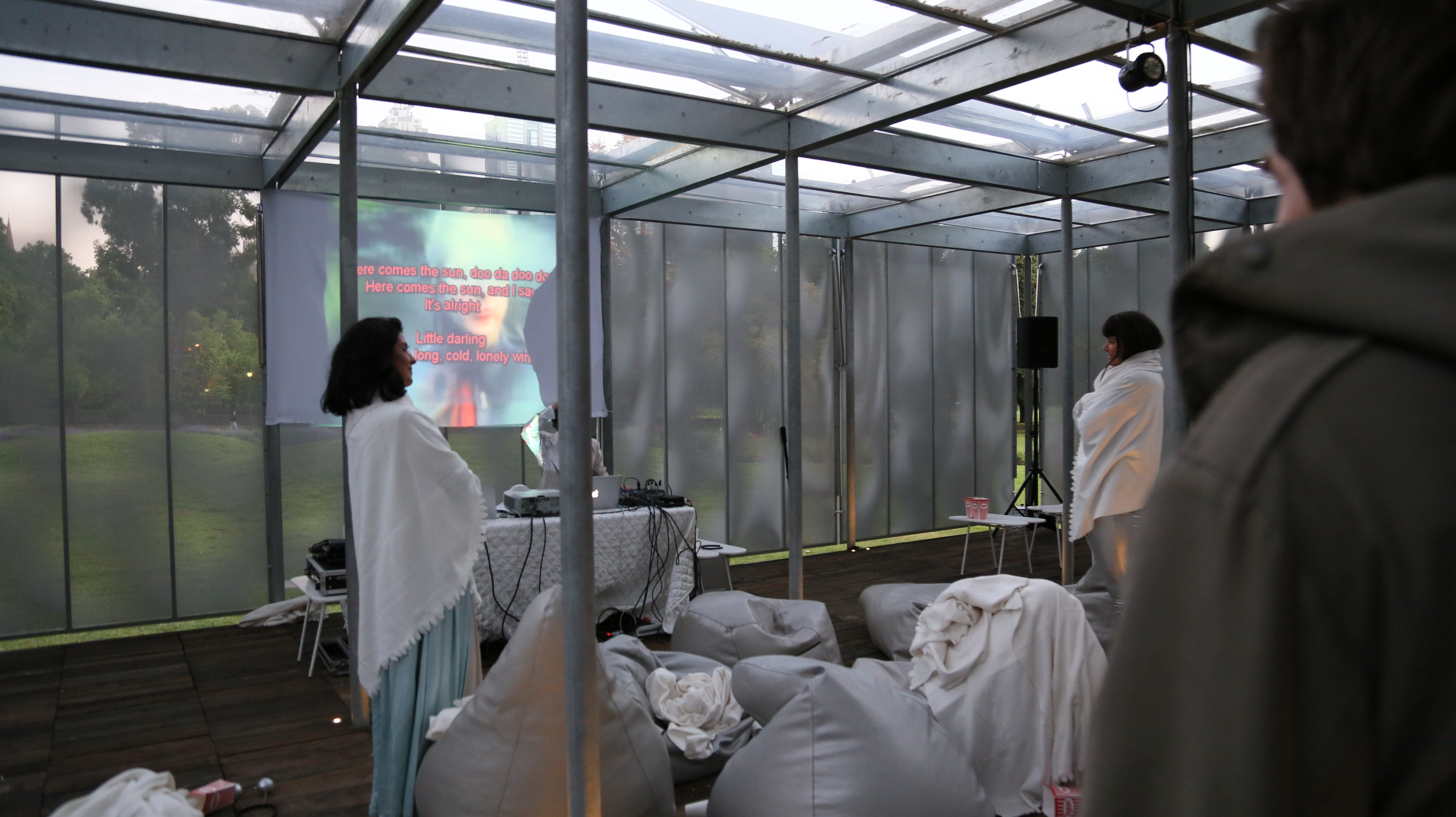 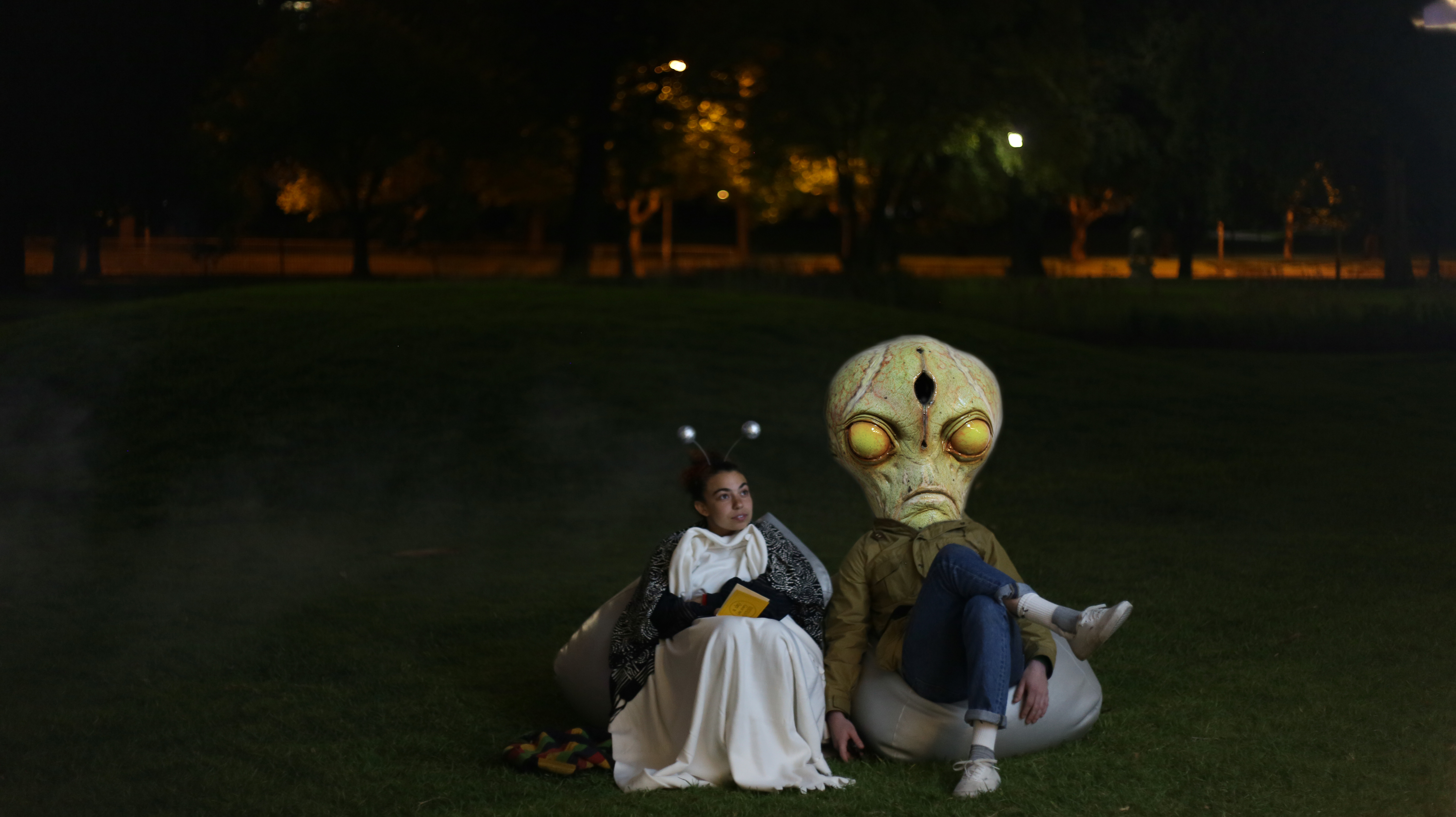 guests 8.00-9pm Sunset Swing Dancing
One of our favourite Telepathy Project memories was of stumbling upon a full moon swing dancing party on the beach in Barcelona. We wanted to recreate this public outdoor dancing to kick of the Star Pavilion all-nighter and celebrate the sunset. So we have invited Anna van Dijk and Chris Sutton from Swing Patrol to teach us the Lindy Hop, a vintage partner dance to swing jazz music that originated in Harlem in 1927. The dance class will start at 8pm with social dancing to follow.

9.15pm Lecture: Astrophysics
Dr.Bart Pindor, research fellow in the astronomy group at the University of Melbourne presents a lecture on Astrophysics titled ‘Should We Be Surprised to Find Ourselves Here Tonight?’

9.45pm Performance: Dream Triptych #1
hypnotic chanteuse and multidisciplinary performer Sophia Brous (following on from her participation in the Barbican Centre’s In Dreams: David Lynch Revisited), who will be presenting the premiere of (Space) Dream Triptych, an avant-garde space opera set in three parts, exploring the shifting dream states of the unconscious, longing and isolation, in infinite space. (Space) Dream Triptych will be performing Sophia in collaboration with Marshall McGuire (harp) and Joel Stern (electronics).Recordings of the Dream Triptych can be heard in the Pavilion in the week to follow.

10pm. Lecture: Ufology-ology
Dr. Martin Plowman, Author of The UFO Diaries, introduces us to world of UFO’s via Fermi’s Paradox and Jacques Lacan

10.50 pm Lecture: Astrology
Astrologer Julija Simas from the Cosmic Intelligence-Agency will present on what astrologers have being doing for millennia, finding meaning and portent in the Cosmos.

11.40 pm Reading of Mike Kelley’s “On the Aesthetics of Ufology”.
A seminal essay from 1997 by the late American artist Mike Kelley exploring the frisson caused by the utopian fixation with the hi-tech image of the flying sauce paired with an alien being of monstrous form, or other abject elements.

1pm Star Wars into
Star Assistant and Star Wars fan Stephanie Elkington introduces Star Wars and shares with us why she loves it so much.

1.10 Screening: STAR WARS
Settle down in a silver beanbag with a cup of tea and a bag of popcorn for a very late night screening of the 70’s classic Star Wars

3.30 Group Performance: Moonrise howling choir (led by Dog) come howl the moon up with us!

3.40 Screening: THE EMPIRE STRIKES BACK
For those still awake settle down even further into that silver beanbag for the next installment in the StarWars saga

5.30 Today’s Horoscope with Sean and Veronica. Find out what the day ahead has in store for you!

6am Group Performance: Here Comes the Sun
Those still standing are welcome to join us in celebrating the sunrise with a group sing-along of the Beatles Classic ‘Here Comes The Sun”. Fact: Carl Sagan wanted to include this song on the Voyager Golden Record but EMI said no. http://voyager.jpl.nasa.gov/spacecraft/goldenrec.html